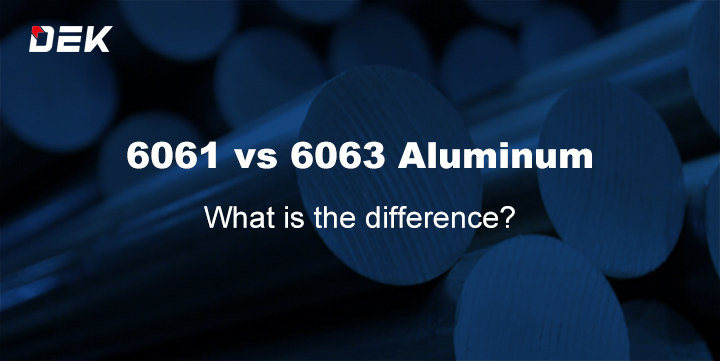 There is however a need to use their respective characteristics to differentiate each alloy for usage purposes. With this, it is much easier to use the best alloy for one’s project. The main objective of this article is to help our readers to differentiate 6061 aluminum from 6063 aluminum.

The aluminum 6061 is a member of the aluminum alloy 6000 series. It has a significant amount of both magnesium and silicon in its composition. This alloy is primarily formulated for wrought products. For the benefit of different regions, 6061 aluminum is designated as EN AW-6061 in European standards. Also, the 6061 aluminum in the AFNOR (French) designation is A-G1SUC while it is CSA GS11N in older literature.

The 6061 aluminum has been in the market since 1935 and it receives its standard designation in 1954. It is one of the most versatile heat-treatable alloys with a range of elemental alloy composition. 6061 aluminum is common for multi-purpose uses as it combines strength with corrosion resistance and highly weldable. It is found in different applications ranging from the aviation industry, marine, to automotive industries.

Aluminum 6063 is a member of the 6000 series of aluminum alloy. It is often referred to as architectural aluminum because it’s a top choice for architectural materials. The aluminum 6063 is designated H9 in British Standard (BS) and EN AW-6063 in European standards. The EN chemical designation for 6063 aluminum is AlMg0,7Si.

Aluminum 6061 has been in the market since 1944 and has received its standard designation in 1954. The 6063 aluminum is widely used to draw constant cross-sectional shapes because of its excellent response to extrusion. Examples of such shapes include tubing, bars, and many more. It is known for its high corrosion resistance property with a good surface finish. Its major elemental composition includes Al, Mg, and Si in descending order of quantity. While aluminum 6063 does not differ from aluminum 6061, its better corrosion resistance and lower strength make it a better choice for extrusion.

6061 aluminum and 6063 aluminum alloys are from the same series and may therefore share similar properties. As a result, it may be tricky to differentiate between 6061 aluminum and 6063 aluminum. Irrespective of how tricky it may be, their distinct properties can be used to draw comparisons between the two. To help our readers in deciding between the two alloys, the following attributes will be used to draw comparisons:

The 6061 aluminum alloy exists in pre-tempered and tempered grade. They include:

The 6063 aluminum exists in about 13 alloy variations. They include:

Chemical components of both alloys can be used to draw comparisons. These chemical compositions may be the same, but the percentage composition differs.

The table below presents a summary of the alloy composition of 6061 aluminum and 6063 aluminum.

This is a measure of how a material performs when machined such as being milled, turned, die-casted, and many more. We used qualitative measures to grasp the overall response to machining. The measure of their respective machinability is in form of a Likert scale which includes poor, fair, good, and excellent. Our examination reveals that 6061 aluminum is better machined compared to 6063. The 6061 is preferred over 6063 aluminum if machinability is the major concern of the proposed project. 6063 aluminum is also machinable but it is well known as an extrusion alloy.

This is a measure of ductility, general material strength, and surface quality. Here, we used the Brinell scale which is a common measurement system for metals. It shows that based on metrics, 6061 aluminum and 6063 aluminum have Brinell hardness values of 95 and 73 respectively. It is important to know that the two alloys are strong and are ductile enough to be formed. However, the 6061 aluminum is preferable if the hardness is a major concern of a project.

The overall strength of a material is a combination of many factors. These factors include yield strength, ultimate strength, shear strength, fatigue strength, and many more. For your reference, we’ve come up with empirical metrics to show the exact strength of both alloys for comparison purposes. Overall, 6061 aluminum possesses higher metrics and may be preferred over 6063 aluminum. For more information refer to the mechanical properties summary table.

Aluminum 6061 is widely used in the industries for general purposes because of its weldability and formability. As a matter of fact, its corrosion resistance and high strength have given 6061 aluminum its application in architectural, structural, and motor vehicle industries. 6061 aluminum uses are exhaustive, while its major applications include:

In terms of machinability, it is evident that aluminum 6061 is more machinable compared to 6063 aluminum. The 6063 is also machinable but it is known as an extrusion alloy rather than machinability.

When considering the hardness of both alloys, the ductility, surface quality, and the general strength of both materials are considered. It is however great that these qualities are scalable and can be measure using different scales. Based on these scales we discovered that the 6061 aluminum is the hardest compared to the 6063 aluminum. Hence, the reason for the preference given to 6061 aluminum over 6063 aluminum when hardness becomes a major concern.

When talking about stronger materials, many factors are considered. Such factors include ultimate strength, fatigue strength, bearing strength, hardness, yield strength, and many more. It can be shown in our mechanical properties summary table above that 6061 aluminum exhibited higher metrics. As a result, 6061 aluminum is perceived to be stronger than the 6063 aluminum, and it’s a perfect choice for projects that require strength.

Finally, this blog post has been able to compare and contrast the 6061 aluminum and 6063 aluminum. It is however important to note that each of these aluminum alloy grades is best suited for specific projects. As a result, we cannot categorically state that one alloy is better than another. Also, the best alloy depends greatly on the project requirements. This means that, while one is better on a particular project, the other is also better on another project. Give us a call today if you have more questions or require the service of CNC machining 6061 or 6063 aluminum. Samples for testing are also available.